I really never noticed the existence of the ZorkQuest series. My fault.

This morning while I was browsing the internet during my breakfast, a version of ZorkQuest: Assault on Egreth Castle for C64 just popped up in front of me. I have been probably too much caught into the main series to miss this minor spin off of the main Zork Saga.

Apparently, during the 1988, Infocom managed to produce two chapters of this series, which were completely different from the main and more popular Zork text adventures:

What is really particular about them is that they are not even games; they pretended to be a sort of interactive books where your role is less then minimal. From a CRPG point of view, they would be better described as an anti-role playing games, where you are neither actor nor narrator but a Über spectator, with a really limited range of choices.

ZorkQuest: Assault on Egreth Castle can be called an interactive comic book. The game consists of text accompanied by pictures, somewhat similar in visual style to comic books; the interaction is restricted to the player's choices that affect the storyline. The player is able to experience the story from the points of view of the several main heroes, witnessing their personal stories intertwining. Several playthroughs are necessary to experience the story in its entirety. 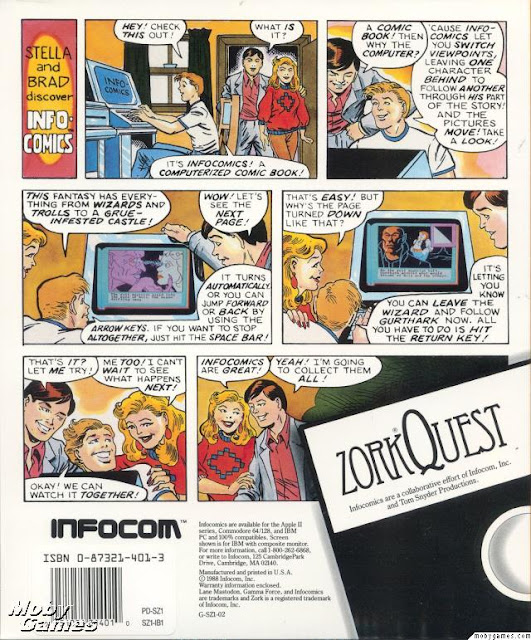 Despite the enthusiasm of the guys on the advertising, ZorkQuest is more a  first attempt to create a bland fantasy game illustrated comic on a computer. I was initially expecting a Fantasy Fighting Game Book structure, but both experiments don't comprehended a magic/health or combat system at all. The unique aspect is they probably are the two official interactive comic ever made on the c64.

However all this awkwardness, both titles will go straight in my wishlist.

---
Images sourced from Moby Games
Posted by Unknown at 11:35