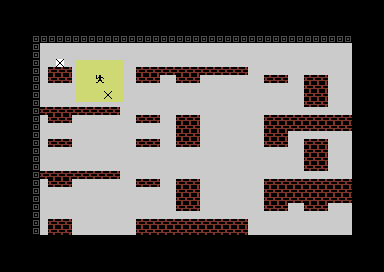 Being the ardent treasure hunter that you are, you had a hard time resisting the stories about the Catacombs of Darkness and the fantastic caches of gold hidden there by the mysterious builders of the underground fortress.


Armed with only a torch, you descended the steps leading down to the catacombs without hesitating, ignoring the weird cries emanating from the dimly lit crypt, images of bulging chests of ill-gotten lucre swimming in your mind.

Today I stumbled into this simple dungeon crawler for Commodore 64 I've never noticed before. Published on Ahoy! (1987/01, Issue #37) and Compute!'s Gazette (November 1994), Catacombs is a Basic language game distributed either on disc and as listing.

The game itself is a dungeon crawler with some really distant similarities with Sword of Fargoal (really few to be honest). The structure is based on a minimal architecture of 10 dungeons to explore, with treasure, traps and monster. To finish every catacomb level, you have to collect the key and find the exit door. For its simplicity, it might be defined as an archetypical casual game, especially for the low level of commitment requested.

More interesting details are explained on its dedicated article, where the coder explains the main stylistic peculiarity of the game.

Catacombs is a game I created with the intention of experimenting with one of the 64’s least appreciated graphic modes-extended background color mode (EBC). Most people refer to it as a useless novelty of the VIC chip, but I have always thought that the ability to change the background color of a whole screen with a single POKE had to have a good game hiding in it somewhere. So far I have created a machine language game and this BASIC program using the VIC’s EBC mode, and have yet to run short on ideas for future projects.


Basically EBC mode works like this: your character set is cut down to one quarter of its usual 255 shapes, giving you only 64 to work with, the first 64 in the set. These first 64 characters consist mostly of alphanumeric codes, so if you are planning on writing a game, you will probably have to redefine your character set to substitute one of your shapes for one of the Commodore’s 64 default characters.
In EBC the first 64 characters of this set are displayed normally, getting their foreground color from color memory and their background color from the register at 53281. But the codes from 63 to 127, 128 to 191, and 192 to 255 get their background colors from registers 53282, 53283, and 53284 respectively. Although the colors are different, the characters still come from the shape tables of the first 64 codes!

Pretty simple game indeed, but definitely worth entering the dungeon crawler category, even though it cannot be considered an actual CRPG, since the game is limited to the simple exploration of 10 catacombs level, not providing any character creation or inventory feature.

In case you want to explore the simplicity of this archetypical game, I've uploaded the C64 disk with official documentation, and the extract from Ahoy! with the article and the actual Basic listing.