Everyone can be omnipotent with Warriors of Ras. 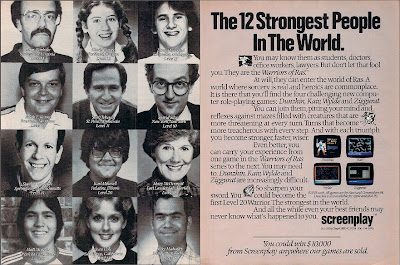 This is an ad published to promote the Warriors of Ras Series and I can just guess it might have been published between the 1982 and 1985. However what we have it's a quite unusual advertisement from a CRPG iconography point of view. The main focus seems to be oriented to a wider and more mainstream target, considering that back in the day videogames (strategy and CRPG on top) were considered too complicated and sectorial. Even with this endemic limit, Screenplay attempted to appeal to a wider range of social classes, trying to project the new and possible target into another dimension in the shoes of a Warrior of Ras.

From what I can remember, this is the first time a software house tried to open a virtual dimensional door on the CRPG world to the general public, no one excluded. They realistically believed that everyone could have an opportunity to step into that door and visit the dimension to familiarize with their new simulacrum.

Even if from a videogamer point of view, I find this ad very weak, but in the same time I'm really impressed by the courage shown by Screenplay with not adding any iconic videogaming topos as a way to attract a different audience. In fact, the headline itself tickles that desire of being omnipotent which everyone has, no matter from what social class are you from. Effectively the message is simple but ambiguous in the same way. And that ambiguity raise the question of how a non-videogame literate person can interpret the fact that all you actions are effective only on another represented plane which is supported by only by the possibilities of a machine.

And then, is that dimensional door still open or CRPGs are still a business only for aficionados?