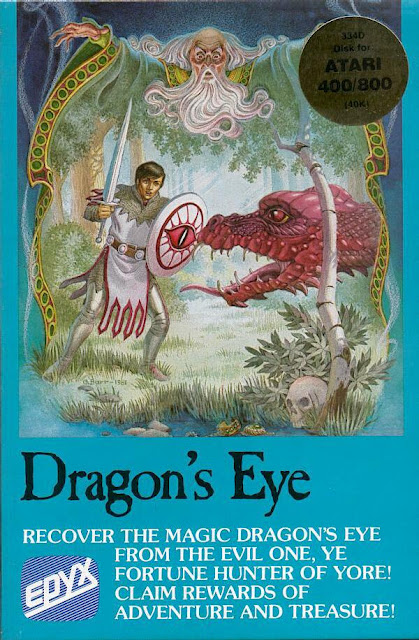 Dragon's Eye is a fantasy RPG in which you are cast as a valiant warrior tasked with saving the lands by completing an epic quest. The lands in question are the "Seven Provinces" and the quest itself involves finding and retrieving the "Dragon's Eye" amulet before its evil power corrupts the entire countryside.

The game is played from a strategic map view from which you select which area to adventure into, rest and make your necessary equipment purchases. After that it's off to explore the realm and battle all enemies you might encounter from a side view perspective. Battles are turn-based and you can issue several different orders to be carried out in queue when your turn ends. You can explore the land as you see fit, but beware the time limit imposed by the Dragon's Eye.

This is my new crux desperationis and its name is The Dragon's Eye, CRPG originally produced by Southern Software and distributed by Automated Simulations (later renamed Epyx) for Atari 400/800, Apple II and Commodore PET during the 1981. Looking more in details at all the versions released, I have noticed that there is no actual trace around of a dumped copy of the PET version, but - surprisingly -  version for Commodore 64 is quite easy to find.

So what's the problem?
The discrepancy I found is that there is no mention of the version C64 on all the official publications even if it is existent and easy to download. And that sounded really odd to me.

Although I couldn't find anything helpful on all the major magazines, after a quick scan the the first clear reference seems to come from the official Epyx catalogues: 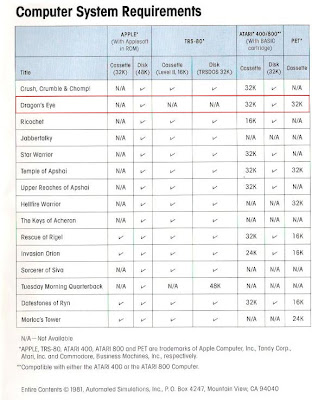 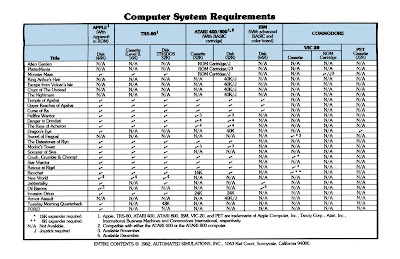 According to what Epyx claimed, there was no Commodore 64 version planned but only for PET. Unfortunately I couldn't find a dumped copy and I'm not surprised me since usually PET software is quite hard to retrieve.

Assuming that the scarcity of PET copies is a given by only by low circulation or other factors, still can't have a clue from where the C64 comes from.

However I had the chance to test Apple II version, just to make a comparison with the Commodore 64 and they look quite similar except for the fact that the c64 version contains probably a clue on its main titles.

Surprisingly all the copyright and release indications have been taken out from the C64 version and this drives me to assume that it might be just a conversion made unofficially from PET. Since the game itself has been programmed in Basic, making the a conversion from PET to C64 would be a quite easy task and it could have been done by anyone who probably decided to remove any reference of the original publisher. Quite weird I know, by it's a possibility.

I tried the check either if I could find any artwork, manual or even a cover for the C64 version but every attempt done has failed miserably, reinforcing the idea that it has been never officially released by Epyx.

Trying to recap, my conclusion has been dictated by these factors:

This is obviously only the first step of the research, because I need at least of one actual proof to support this theory. Having a PET version of the game will be relevant to check if two versions are consistent or something has been modified intentionally.

Last but not least.  if anyone has more information about it, just leave a comment or email me. I will be happy to complete this case and remove the infamous crux desperationis from the title of the next post.