Published by Atlantis Software for Commodore 64 in the 1985, Velnor's Lair is a conversion from Spectrum of a decently quoted text adventure. The original game was published in the 1983 by Quicksilva for ZX Spectrum with a quite different artwork (displayed below) but for some unknown reasons Atlantis Software - just two years after - decided to change the original artwork for something different.

The game itself is basically a text adventure with some RPG elements. More deeply, according to the inlay, the game claims to have been based on Dungeons & Dragons; surprisingly, TSR didn't sue Atlantis for the mention of the well known and hyper-protected D&D brand. I couldn't find any copyright specification on the inlay and so I have to  guess that they intentionally tried to push the game using the name of one of the most popular RPGs around at that time. "If it is D&D, it will sell!", they probably said.

"In this Dungeons & Dragons style adventure, you maybe be a warrior, Wizard or Priest. [...]"

Aesthetically, I found the artwork quite simple but interesting, especially for the old school fantasy illustration where an hypertrophic fighter is trying to slay the evil wizard while he is in a sort of transmuted ethereal form. Differently, the choice of the seventies-style font, the gold finish(1) and the purple colour are a bit unusual for a fantasy game but in some ways they make this version quite unique in its genre. The only disappointing visual element is represented by the use of an uninspiring sans serif font for the instructions.

The game itself is based on a typical high fantasy plot, synthetically described here on Crash Magazine:

The Black Wizard Velnor has gone into hiding in the goblin labyrinth beneath Mount Elk. After centuries of searching he has finally discovered the ancient tomb of Grako and is about to realise his ambition, to become a true demon on earth. There is only one hope for mankind, and that’s you, of course. You must penetrate Velnor’s defences, avoiding the traps and surprises before his metamorphosis is complete — but Velnor is a master of illusion. 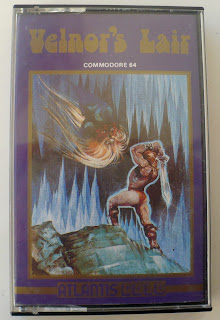 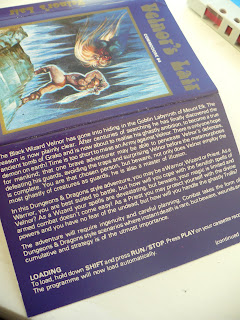 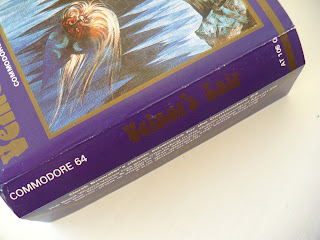 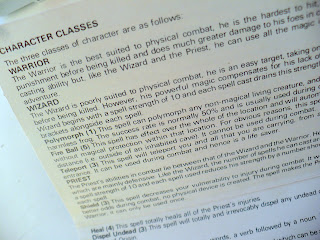 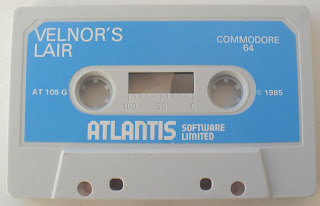 ---
(1) The use of the metallic gold has been probably used throughout all the Atlantis Gold series.
Posted by Unknown at 12:08