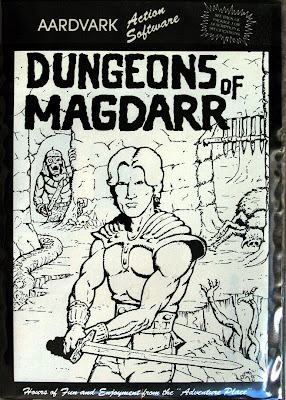 In my previous post, I tried to follow the path of Dungeons of Death, an obscure CRPG published in 1983 by Aardvark for Vic-20 and announced for the Commodore 64 but never - apparently - released.

Why I'm not really sure that Dungeons of Death was never released for Commodore 64? For a very simple reason.

My initial theory was based on the idea that Aardvark advertised DoD for Vic-20 and Commodore 64 on their 1983 Catalogue but then changed plan deciding to abort the CBM porting. However I found a document some days ago which partially changed my theory.

Following you'll find some images of a very rare Aardvark Games Catalogue from the 1984 where the software house advertised the availability of DoD for both Commodore platforms. (1)


Why then Aardvark decided to advertise a game for two years in a row never releasing it? Its presence on the second catalogue might open an interesting game-existence scenario; but again, why is impossible to find it? Unfortunately the original owner of the company Rodger Olsen doesn't want to answer any question about it, leaving the release of Dungeons of Death for Commodore 64 a mystery.

What's the other theory so?
Looking at the Catalogue above, you will see another similar title from the same company: Dungeons of Magdarr which was actually released for C64 and even really easy to find on the web. DoM is a quite interesting 3D dungeon crawler, D&D rule based with a decent character creation process as well. Apart from one detail anyway, DoD and DoM look exactly the same.


What's really different between the two games so?


The main difference, as far as I can see, is the user interface: Dungeons of Death is 2D while Dungeons of Magdarr runs an interesting 3D wireframe in style with Akalabeth. We have to note anyway, that because DoD is unplayable at the moment (2) I can't explore both games in parallel to check if Olsen even used the same dungeon structure for both games.

The Dungeon of Dilemmas.
It is possible that Aardvark just decided to release DoD as DoM for the C64 with a more interesting graphic interface and different features? Possible, but why then they kept both games in the same catalogue?

Am I missing something?

----
(1) British Intelligence was just another Aardvark label. I've compared the addresses and they match perfectly.
(2) The only dumped copy of Dungeons of Death available on the web has a major glitch probably caused by a bad dump or a damaged tape. See previous post.