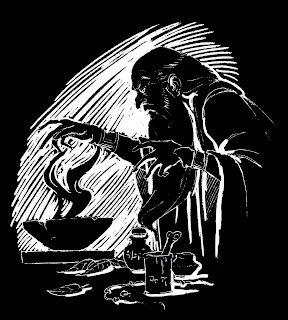 On Monday morning I had a little bit more time to play Sorcerer of Siva and get a bit more used to the Magic System. If you are wondering why I'm dedicating one full post to a CRPG Magic System, the answer is because I believe that every single fantasy CRPG has to consider a magic system no matter its complexity.

The Sorcerer of Siva, due its sorcerer vs sorcerer nature, has an interesting magic system considering its  old age and simplicity. Unfortunately some of its peculiarities, in my opinion, tend to make game to hard to play.

Apart from my personal considerations, we can roughly say that Sorcerer of Siva has a magic points system, which traditionally it's the most common for non-D&D and AD&D based games.

Your value magic points derive directly from your level of Aura, which is the emanation of your mental and magical power:


Your aura is a measure of the mental or mystical energy needed to cast a spell. Performing any magical act temporarily depletes or weakens your aura (that is, shifts it toward the red end of the spectrum), although some spells cause it to fade more than others. Although the computer keeps precise track of your mystical energy, AURA will be displayed as one of only six colors: BLUE (best), GREEN, YELLOW, ORANGE, RED, or BLACK. (On some computers, this state will be represented by a printed word on the side of the screen; on others, the color change will show up on the figure itself.) An ORANGE or, especially, RED AURA may prevent you from casting any of the more difficult spells, and if your AURA is BLACK, you will be unable to cast spells of any kind. Unless you are EXHAUSTED, doing anything except casting spells will strengthen or refresh your aura (shift it back toward the blue end of the spectrum). The less physically tired you are, the faster your aura will be enhanced.


A fair amount of Aura will allow you to cast spells during the game and even if the list is limited to seven only, a wise use of them will probably establish your victory over the maze master*.


Each spell has a nonspecific cost which it's detracted from your Aura. The lack of statistics about the magic point costs makes the management of your magic reservoirs quite chaotic. Another interesting aspect is that even if the system is not based on Vancian Magic, spells are in some way forgettable.

Regardless of your aura, you can't cast a spell you have forgotten. This unfortunate circumstance can come about in either of two ways. Whenever the sorcerer appears on the screen, he may cast a spell of forgetfulness, causing you to forget the most powerful spell you have left. Also, the higher the skill level you select at the beginning of the game, the
more spells you have forgotten and the fewer spells you have available initially. (This is presumed to be the result of previous attacks by the sorcerer.)

Spells might be forgotten so, but if are your lucky to find one of the touchstones inside the mines, you can regain what is "lost":


The only way to remember spells you have forgotten (including those you lacked at the beginning of the game, if any) is to find touchstones inside the mines.  Whenever you find a touchstone, you will recall one spell—the lowest-numbered spell you don't know. If you knew (remembered) five spells, a touchstone would bring to mind Spell #6 (Bolt of Lightning).

It's interesting to see the choice of words of this last part of the manual where a mental block substitutes the actual memory loss mentioned before. According to this part, your character doesn't really forget the spell, he is not just able to use it because the magical mental block. It's a detail I know, but they all together build up the flavour of every single aspect of a CRPG.

In the end, this magic system is quite simple and easy to use and it suits with the game concept. However the frustration grows when you realize that the level of your Aura goes down really quickly due to the high frequency of the encounters. Thus after few minutes you can find yourself completely drained and unable to cast any spell and, trust me, it is really frustrating.

The high difficult level reminded me the earlier tendency to create really challenging and complicated CRPGs because the main marketing target was intended be the small and demanding niche of computer academics, wargamers and role playing gamers. In this case, anyway, we can't really talk about a complex system, but an excess of difficulty in the gameplay.

*If there is anyone around who managed to finish the game, please contact me.